Even the Russians have their traditional pasta recipe…

This simple but wonderful dish got its name because of its frequent appearance in the diet of the naval forces of the former Soviet Union.

Macaroni po-flotski became popular mainly due to its quick preparation and satiety, which is a must in the army. However, they gradually went to the tables of ordinary mortals, where they very quickly established themselves even with their nautical name.

These are smaller knee pastas, penne or fusilli, which are mixed with minced meat (beef or pork) roasted on onions. And that’s all!

Well, not quite. This dish is usually flavored with the typical Georgian Adjika spice. Which is actually a mixture of dried hot pepper, garlic, cumin, coriander, dill, salt and local hops (suneli). We’re guessing you probably won’t have adjika on hand, but you’ll definitely have most of the spices that make it up.

So be sure to try this delicious pasta dish.

For 4 portions we need:

Heat the oil in a large pan (some recipes use a mixture of oil and butter), add the chopped onion and fry it until golden.

Then we add minced meat, spices, we can add a drop of water and fry it on the onion until soft.

After 15 minutes, cook the pasta in salted water.

Finally, add sliced ​​tomatoes to the meat and cook for about 10 minutes (while the pasta is cooking).

Mix the drained pasta with the meat and serve. 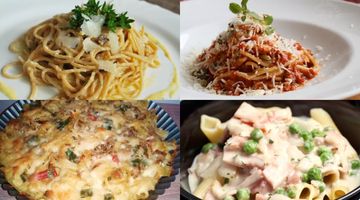 A famous pasta for every day, ready in a few minutes – be sure to try it